Everytime I google for Sikh websites, I find forums with so much hate speech & derogatory remarks against Hinduism & Brahmins. I call this Brahmin/Hindu bashing. As a proud Singh guy who loves his Sanatan Hindu Sikh heritage, this really gets to me. I have read up on so much Hindu/Sikh history that enough is enough! I'm sick of how much low the 'Sikhs' can get especially the Talibanised ones from Canada.

And how many of you have seen what the Gorrees are wearing? I mean, turbanated women as well now! Since when a woman should wear a turban - they look like muslim women. What happened to the traditional Kaur with a beautiful bindi & colourful clothes? Talibanisation of Sanatan Sikhi at its best. Time to set the record straight.

How did Brahmin bashing begin?

So lets look at the next few points as to how this has come about which has made India a country with a State policy for Brahmin bashing. Its pretty sickening since this type of diarrhoea comes from illiterate, ignorant people who have 'grown'  listening to or reading up nothing but crap & dog poo, being constantly churned out by our SGPC 'Gyanis'.

Talibanised Sikhs are fed on venom against the centuries old Hindu Dharma & values of which Sanatan Sikhi is also a part. They are brainwashed by those with vested interests, into believing that behind every tree lurks a Brahmin who wants to hurt & kill off Sikh Dharam. They spread lies about the Vedas, Upanishads & even Manu Smriti which is the first scripture on rules for a follower of the Vedic Dharma. I guess they are ignorant & its like the blind leading the blind syndrome. But it is pissing me off bigtime nowadays since not only one anti-Hindu website is out there which is being run by Neo-Sikh fanatics, -  but millions. What is wrong with these dopes? Is Sikhism only about having a Turban & Beard so to identify ourselves with Sikhi traditions? Did you know we are losing our great Sanatan heritage because of mischief being made by Canadian Talibani Sikhs working with the Akal Takht & the SPGC also?

False stories & myths that the Talibani neo-Sikhs have spread so far are plenty attacking all the great Dharmic principles of our mother faith: Hindu Dharam.

The ones that have made me laugh are the following when they compare Hinduism to Sikhism. Here they are:


Myth 3] The claim that 'All the Gurus rejected idol worship & Hindu practises'- give me a break please.


Myth 5] Gangu Brahman ( this guy was invented later on by the British & SGPC) but more about this character very soon as his story has become really ridiculous in the past 5 yrs.


Myth 6] Sikhism is not from Hindu scriptures/ also from Islam - this is the best one so far!


Myth 7] Sikhism was created because of caste system - another good one to bash Hindus with!


Myth 8) Sikhism is different religion that does not worship icons..Hindus worship stones!


Myth 11) Hari, Krishna, Vishnu, Ram etc mentioned in Shri Adi Granthji are not the same as the Hindu Gods..


Its laughable & at the same time I feel pity upon these ignorant arrogant souls who have hijacked the Gurus' Sanatan philosophy & made it their own into a Christian/Islamic type of doctrine.
This list is endless. But anyone with a brain would know how insane the neo-Sikhs are when they make ridiculous claims against Hindu Dharam & how Sikhism is a different 'new' religion. I will go into these fanatic claims soon. But first how Brahmins are blamed for everything they never did in the first place.

1] Anti Brahminism/Hinduism began during the last 2 centuries when the British parasites set their 'manhoos' foot on our soil. Though Islam too tried in its own way by killing thousands of Brahmin priests during their Jihads of Hindu temples - I'll go into this later on as this is a much wider topic & its best I stick to explaining how the British played their satanic part in the Sikh-Hindu divide.


2] Max Muller : A paid agent of the British translated the Rig Veda & Manu Smriti in a most vulgar way. He twisted & distorted every word of sanskrit since he wanted to spread Christianity. This Muller was a German, who was especially employed by the British Empirein 1847 to translate & misinterpet the Vedas  in such a way that Hindus/Sikhs would lose all faith in these great scriptures & hopefully become Christians. He was paid £4 per sheet of rewriting Hindu scriptures which is nearly £1000 in today's value. This was a very high price but the Gorres were determined to break Hinduism & weaken it as much as possible.

3] Max Muller was born poor & this was his golden opportunity as a Christian missionary to start breaking the pride of the people who belonged to a land like India ,which is where the great Rishis, Yogis, Sidhas & Gurus have taken birth. The British knew that the pride of India was the Vedic Dharma.

Muller's letters dated August 25, 1856, February 26, 1867, and December 16, 1868 reveal the fact that he was desperate to bring Christianity into India so that the religion of the Hindus should be doomed.

His letters also reveal that:

He lived in poverty before he was employed by the British. His duplicity in translation was praised by his superiors, and in London, where he lived, there were a lot of Orientalists working for the British.

“I should like to live for 10 years quite quietly and learn the language, try to make friends, and then see whether I was fit to take part in a work, by means of which the old mischief of Indian priestcraft (Brahminism) could be overthrown and the way opened for the entrance of simple Christian teaching…Whatever finds root in India soon overshadows the whole of Asia.”

“I have myself the strongest belief in the growth of Christianity in India. There is no country so ripe for Christianity as India, and yet the difficulties seem enormous.”


4] Muller invented the Aryan Theory & propogated it like a devil. He wrote this in the letters to his wife:


"It took only 200 years for us to Christianise the whole of Africa, but even after 400 years India eludes us, I have come to realize that it is Sanskrit which has enabled India to do so. And to break it I have decided to learn Sanskrit."

The soul of India lies in Sanskrit & the Vedas. And Lord Macaulay saw to it that the later generations are successfully cut off from their roots.


5] He invented the Dravidian theory also aiming at the South Indians & cooked up stories of Brahmins as Aryans who 'invaded their lands & oppressed them'. His sole aim was to break the backbone of Sanatan Dharma by vilifying the Brahmins who were great scholars, mathematicians, warriors & teachers. They were in his way of spreading his Christianity & converting gullible Hindus & Sikhs.


Brahmins & Their Contribution to Sikh Dharma

19 Bhatt Brahmins who were originally from Kashmir helped the Gurus to write & compile the Shri Adi Granth?


1] Despite the fact that Brahmins made a significant contribution during the times of Sikh Gurus, their role has not been highlighted so far. Out of 35 authors whose writings have been incorporated in Shri Guru Granthji, 19 were Brahmins, making their contribution nearly 45 percent. The Bhatt Brahmins sang and wrote in the praise of Sikh Gurus and 11 of them had even laid down their lives for the cause of Sikhism during the lifetime of Sikh Gurus. They were bestowed with the honour of preacher (Manjis) by the Gurus.This is the crux of the research, "Brahmin Bhala Aakhiye", conducted by Iqbal Singh, senior superintendent of police, Amritsar (rural). He has quoted hymns from Guru Granth Sahib to substantiate his viewpoint on the subject. The research is a collection of information about the Brahmins who hail from far-off places like Jagannath, Kashi, Gaya, Brindaban, Kurukshetra, Lahore, Jhelum, Kashmir, Gorakhpur, Jodhour and Gwalior, and their contribution towards the Bhakti movement. 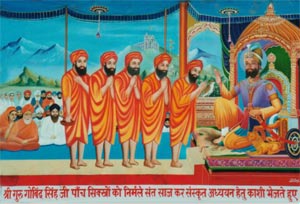 2] The Panch Pyarre were sent to Varanasi & Haridwar by DasamPitah Shri Guru Gobindji to learn from Brahmins the Vedas & Sanskrit. Again this is not ever told to us by the fanatic neo-Sikhs. Guru Gobind Singhji himself was taught Vedas, sanskrit, farsee & martial arts by a Kashmiri Pandit named Kripa Ram Dutt, who was good & loyal friend of Guru Tegh Bahadurji. Other Brahmins from Kashmir who were most loyal to the Gurus were Praga Sen, Mati das, Dayal Das, Sati das etc all of whom gave their lives on the battlefield for Sikhism. The majority of warriors who fought alongside of Guru Gobind Singhji were Mohyal Brahmins of Kashmir who died for Sanatan Sikhism.

3] There are 35 Classical Ragas that the Shri Guru Granthji is sung in - these Ragas were Vedic Ragas from Sama Veda which were set by the 19 Kashmir Bhatt brahmins who have given so much rich heritage from Hindu Dharam into Sikh Dharam.

4] Sanatan Sikhism recognised the 3 main Bhagats before the life of Guru Nanakji; they are Bhagat Ramananda, Bhagat Surdas, Bhagat Jayadeva.  Many of the other icons of Sikhism are disciple of Brahmins such as Bhagat Kabir, Bhagat Dhanna, Bhagat Ravidas, Bhaga Pipa, Bhagat Sain. The writings and sayings of these icons are preserved in the Sikh text, the Sri Guru Granthji.

5] The Moghuls targeted mostly Brahmins because they knew our strength lay with the scholarly Brahmins on our side. They kept our Dharam alive because they had knowledge of Shastar Vidya, Malla Yudha & Gatka. When the muslims realised that they were unable to defeat our fighting spirit because of the Brahmins preserving all aspects of Dharma, they carried out annual Jihads against them to finish them off completely. Akbar, raided Varanasi temple several times, but he was met with fierce opposition from armed Brahmin priests who fought the muslim forces bravely. Akbar raided the temple & seized it through force one day - he rounded up 30,000 pandits that day & forced them to accept Islam but the Pandits were adamant to die rather than accept anything other than Sanatan Dharma. Akbar massacred them in cold blood.

6] Brahmins such as Raja Dahir of Sindh, Rajpal Shahi King of Afghanistan, Vijayanagar Kings, Banda Bahadur are but a few of the several warrior Brahmins who have constantly fought to protect India & its people from Islamic invasions throughout history. Recent Brahmins who laid down their lives against the British were Mangal Pandey, Veer Savarkar, Chandrashekhar Azad, Subhash Chandra Bose & not to forget Gangaram Tilak.


7] Maharaja Ranjit Singh's own bodyguard was a Brahmin who protected the Maharaja with all honesty & loyalty.


Next I will compare what the neo-Sikhs shout out about Hindu beliefs like Sati, idol worshipping, status of Hindu women, Brahmins as 'oppressors', all of which is malicious & derogatory. These are normally used when a neo Sikh is doing his/her bit for 'Hindu Bashing'.