GurFateh!
I am in the mood for Neo-Sikh bashing today! And the reasons are plenty. For a start all that whitewashing on their part of the Nishaan Sahib being a purely 'Sikh' flag & how the sacred Khanda, itself has nothing to do with Hindu Dharma - this misinformation gives the ignorant Sikhs of today a wrong sense of self pride without any one of them ever learning the truth behind how the flag came about in the first place. Neo-Sikhs of the Singh Sabha managed to brush all the Hindu traditions under the carpet far away from the eyes of the future generations, though overlooking the main fact that Saffron is traditionally a Sanatan Dharmic colour. Our flags hoisted above sacred shrines such as Hindu mandirs & Gurudwaras symbolise the sanctity of our ancient heritage of Hinduism. Our Sadhus, Gurus, saints, vairagis etc all wear traditional colours of Saffron. They even wear seli topis & turbans & have long hair as well as beards. This is not just the mark of a Sikh, but traditionally, a Hindu mark. Rajput warriors & Kings were the first ones to keep unshorn hair & long beards during the 15th century onwards. Before them, the Hindu Rishis & Sadhus, Siddhas & Yogis all kept unshorn hair & wore traditional turbans. But the stooges of Tat Khalsa & the Sikhi Taliban brigade have painted a very false picture to all the people of Punjab.


Ignorant of the fact that the 'Sikh' flag, that was carried on many a battlefield by the Nihangs & Khalsa armies, including that of Maharaja Ranjit Singhji, usually had a motif of Hindu Gods of war such as Lord Shiva, Goddess Durga, Goddess Kaumari, Goddess Varahi, Hanuman etc, the Singh Sabhias with the Talibanised Sikhs have falsely continued with their propagation of Nishaan Sahib as the original 'Sikh' flag during the time of the Gurus. They even deny any connections with the Hindu weaponry of Khadga ( 2 edged sword) & the Chakra ( Lord Vishnu weapon) & simply play them down as being from a different tradition.


THIS IS A BLATANT FRAUD!


Recently many questions are being raised concerning the several controversies that surround the re-writing, re-editing of Sikh history as well as the Shri Adi Granth - whether the Kartarpur Bir itself is authentic or not. However, this is another topic I will go into later on.


Back to the flag with motifs of Hindu Devatas which every Sikh & Talibanised Neo-Sikh must know of & acknowledge the fact that YES, Sikhs were Hindus of the Sanatan tradition of India before the British missionary satans ruined Punjab & divided its people who all acknowledged themselves as Hindus prior to the white guy setting foot on Indian soil. Khalsa warriors used to carry these flags onto all the battlefields when fighting the Islamic tyrants & British imperialists & it is my pleasure to present an entire post on images of great history that the Tat Khalsa stooges have kept away from all of us. Let us take a closer look at the history behind the Khanda, its sacred symbols of the Nishaan Sahib which was later on made the emblem of the Sikh flag. 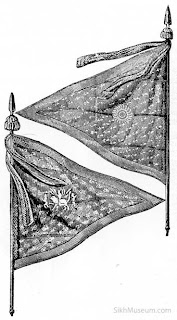 In the image above, if we look closer, we can see the Hindu Goddess Chandi or Durga seated on a lion & she bears in her hands all sacred weapons such as the Khanda, trishul, mace, Chakar etc which are also a part of the Nishaan Sahib. 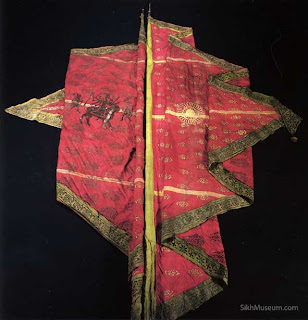 'Sikh' flags of the 18th Century / 19th century commonly bore motifs of Hindu Devatas such as Lord Shiva & Goddess Shakti. In the photo : The red field of the banner is divided by three narrow gold horizontal bands crossing the banners. On one side is a central motif of a yellow sun and a red background which is covered with a block printed pattern of gold flowers. On the other side of the banner is a central motif of the Hindu Goddess of War Durga in black riding on a lion or tiger with two attendants and the red field of the banner is covered with a repeating block printed dark scroll pattern. 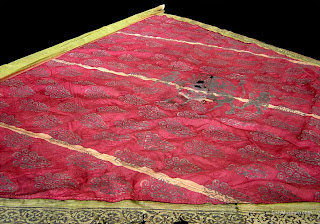 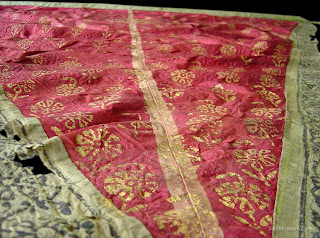 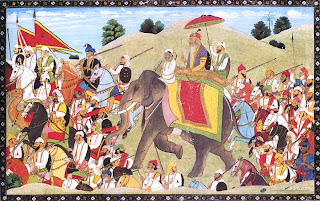 Hari Singh on elephant circa 19th century. A military procession of Hari Singh Nalwa (1791–1837), one of the greatest generals of the Sikh Empire. He became the Commander-in-Chief of the army along the North Western Frontier of the Sikh Kingdom and also served as Governor of various provinces. The military procession depicted is lead by two horsemen carrying battle standards. 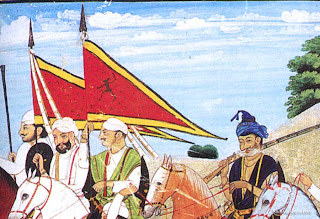 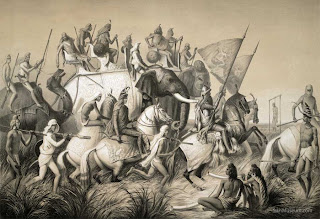 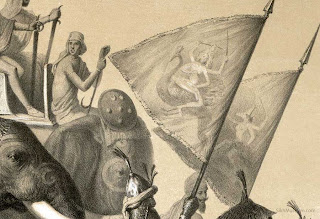 Above: The two Maharaja Sher Singh military banners in the Soltykoff sketch also have central motifs related to the theme of victory in battle. The banners contain two of the Matrikas, a group of Hindu war goddesses that are usually depicted together. One banner has a central motif of the war Goddess Kaumari. Within Hinduism Kaumari is considered the power of Kumara, the God of war. Kaumari is depicted on the banner riding a peacock, with multiple heads and holding weapons in her multiple arms. The other battle standard only partially visible in the Soltykoff sketch shows a depiction of the war Goddess Varahi described in Hinduism as the power of Varaha - the boar-headed form of Vishnu or Yama - the god of death, with a boar head on a human body. Varahi is depicted on the banner holding weapons in her multiple arms. 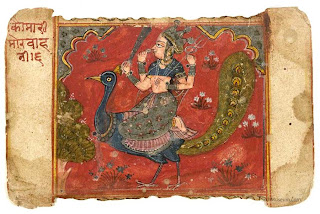 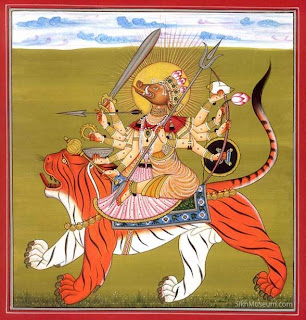 Goddess Varahi seated on the tiger- She is with the human body & a fierce boar face wielding the sacred Khanda & all weapons in her hands. 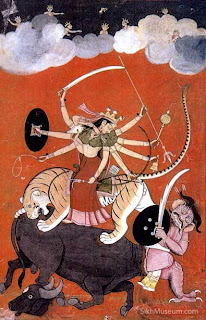 The fierce Goddess Durga with the Khanda & all scared weapons, given to her by all the Trinity of Gods : Brahma, Vishnu & Shiva before she went into war with Mahishasura the Buffalo demon. 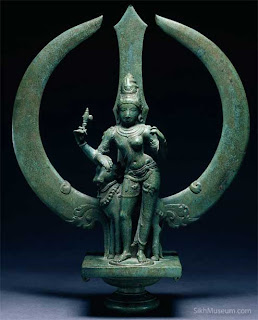 Above: Ardhanarishwar form of Lord Shiva, with His consort Shakti - He is holding a battle - axe, while Devi Shakti whose hand once held a flower.Behind is the broad Khanda sword at the centre & Ardha Chand. The Sanskrit word 'Ardh' meaning half is Addh in Punjabi. The Chandra or moon is known as Chand in Punjabi - meaning Half-moon. The Nihang tradition of Sanatan Sikhi, includes the wearing of Addh Chand - the first common variation is of wearing th half moon symbol of lord Shiva with a Khanda sword in the middle while the second variation features three bladed weapons i.e. 2 swords with a Khanda at the centre that are all within the Addh Chand. This assortment is known as the Gajgah. Wearing the Addh Chand is regarded by the Nihangs as being an integral part of  Shiv Swaroopi or the very form of Lord Shiva.
Lord Shiva is one of the Trinity of Hindu Devatas known as the Trimurti. He is the destroyer as well as the MahaYogi. The crescent moon represents the immortality of Shiva as Akaal Purush or Akaal Purukh - the Timeless Supreme Being.

As explained by the Buddha Dal which is the oldest faction of the Nihang sect :

There are a wide range of complementary understandings all which allow one to analyze the interaction of Shiv-Shakti within the Nihang Singh at various levels.  Shiv is believed to be represented by a half moon (Aad Chand), signifying calm and coolness. Shakti is represented by a sun and is believed to be a more powerful energy and the driving force of the universe, within the Sikh tradition Chandi (personification of shakti) or Durga is Shakti.The Aad Chand (crescent moon) representing Shiv has long been a trademark of Nihang Singhs as is the wearing of arms; representing the divine union of Shiv and Shakti. 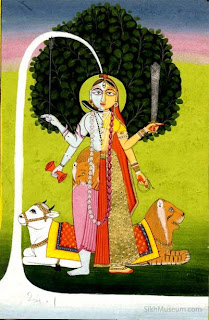 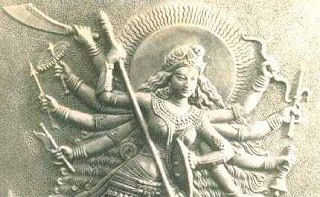 Above: Ardhanarishwar - painting circa 1800 - Lord Shiva has the River Ganga flowing out of His matted locks, He holds the drum, while His consort Parvati holds the Khanda sword & Rosary beads.
Above: Mata Durga with the Khanda sword, Chakar, battle-axe etc
''Pritam Bhaguati Simer Ke Guru Nanak'' - the beginning verse of the Var Shri Bhaguati ji Ki is highly controversial nowadays with Talibanised Sikhs crying out that the word Bhaguati here means a 'Sword', in a deliberate fraudulent manner to denounce all connections with Hindu Devatas. Bhaguati in Braj, Awadhi & Sanskrit is another name of Goddess Durga & also has the meaning of Shakti which represents the Primal Mother Goddess, whereas the word Khadga & Khanda stands for the double edged sword. This concept has completely become played down by the thugs of the Sikh Taliban brigade the Singh Sabhias - they have managed to spread the ridiculous rumour that when the 10th Guruji was speaking about Bhaguati, he actually meant it was a sword. Whereas in fact, Bhaguati stands for the Divine Shakti of the Divine consort of Lord Shiva. That is why all the Siddhas, yogis, sadhus & including Guru Gobind Singhji himself invoked the immortal Mother Shakti ( a feminine form of Akaal Purukh) before setting out onto his mission. She is powerful, one that transcends all the material planes of Sattva, Rajas & Tamas, who is not subjected to Birth & Death. I would also like to add here that Guru Gobind Singhji had placed the feminine Shakti of Durga above or before even mentioning the rest of the Gurus - She is invoked bfore the Gurus even giving great emphasis on the feminine aspect of the Divine Akaal.

''First and foremost I invoke Bhagauti, and then set my mind on Guru Nanak. Then I seek the help of Guru Angad, Guru Amar Das and Guru Raam Das, Arjan, Hargobind and (Guru) Har Rai be remembered. Sri Harkrishan be meditated upon whose mere glimpse removes all sorrows. (Guru) Tegh Bahadur be remembered as it causes the home to flourish. They all help me at all places. ||1||'' 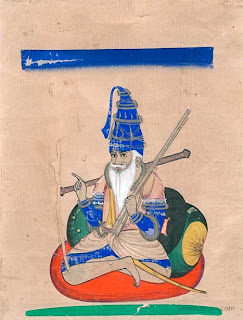 Nihang Chieftain
ca. 19th century, paint on paper, Gurmit Singh & Satnam Singh Collection
The shape of the straight edged khanda sword blade at the center of this Nihangs elders turban is quite similar to the shape of the blade found in the modern khanda emblem as are the shapes of the curved swords.